First impressions. They last. Unfortunately if you don’t make a good one, it’s hard to repair it again unless you can truly impress. Referees are constantly forming first impressions for players when we arrive at a new field, a new game and a new team. This quite often starts at the coin toss where we call on the captains.

Having watched a fair amount of televised matches, I came across one of my favourite executions of a coin toss in a UEFA Champions League Quarter-Final match between AC Milan and FC Barcelona at the San Siro on 28th March 2012. The referees in charge of this match included Referee Jonas Eriksson assisted by Stefan Wittberg, Mathias Klasenius, Strombergsson and Stefan Johannesson; the Swedish UEFA elite referee crew.

The raw video file of the toss is below.

The rest of this post is dedicated to an analysis on what was done in this video by the Swedish team. The three key people are:

The first picture here shows the referee team ready for the toss. Eriksson and his team are waiting for the approaching captains to arrive. 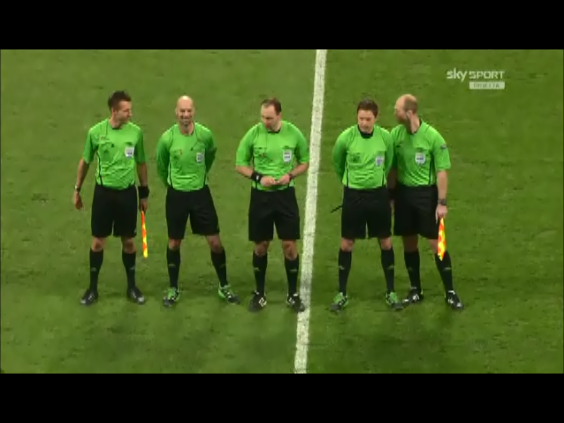 The next two snapshots are my favourite. Favourite because it’s a technique I picked up from watching this match. 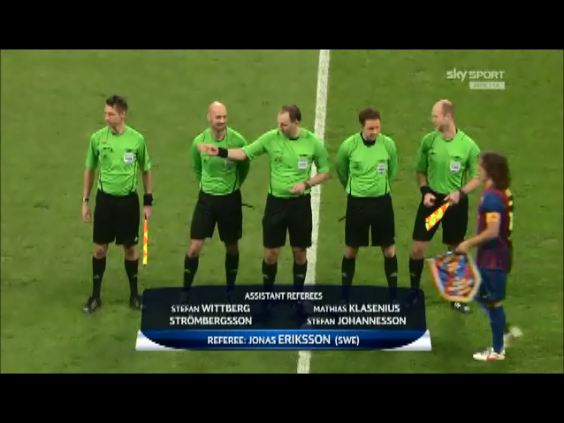 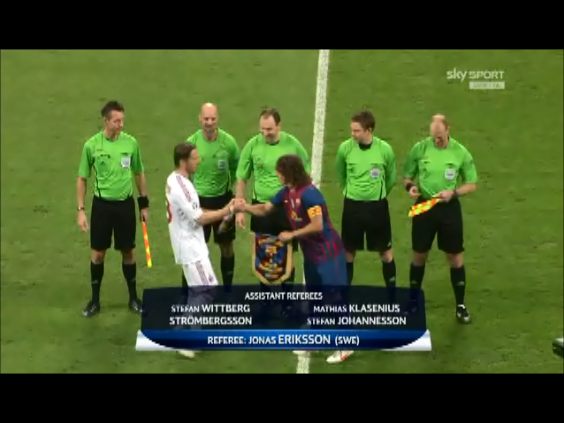 Have you ever had the scenario where you call the captains, they both arrive and shake hands with you but find it awkward to shake hands with each other. I’ve seen some referees even say “Shake hands” which makes it all the more awkward in having to ask! Now… this eliminates that. A very simple technique using body language.

In the picture you can clearly see Eriksson’s hand out. He is opening his arm out as a welcoming gesture to the oncoming AC Milan captain, Massimo Ambrosini. As the captain approaches, Eriksson swings his arm to indicate FCB captain, Carles Puyol who has already arrived. An important note: Eriksson is smiling and creating the welcoming environment to both captains when doing so so he perfectly gets them to shake hands without saying a word and already clears the air of any pre-match tension/nerves.

I have used this approach without fail and it works quite well. Be sure to indicate the captain who has already arrived just before the late-arriving captain reaches. This is because the vast majority of captains assume your hand is held out to shake hands with them but quickly realise your intention was to point out the other captain when you pull it across. Also notice how with the indication, Eriksson has his thumb tucked into his palm; clearly not intending to shake Ambrosini’s hand first. 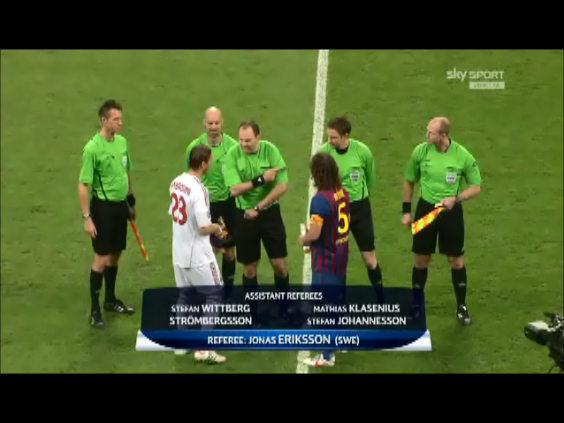 The one and only message Eriksson delivers to the captains is clear. Respect. Respect your opponents, respect your teammates, respect the officials. It’s always best to avoid lecturing captains. They hear the same old story all the time so unless there is a particular concern, it’s always best to ask for mutual respect and fair play. 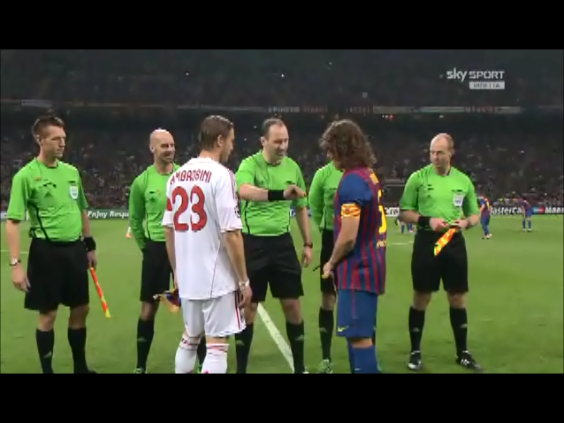 Shows both sides of the coin

Now the juicy portion; the all-important coin toss. Eriksson pulls out his coin and shows both sides to both captains. It prevents any argument of bias by showing that they aren’t in fact being set up by a two-sided coin. I’m sure it came with an accompanying explanation of what both sides of the coin showed. I have my personal spiel on my coin that I could recite in my sleep. It’s this one from b&d. 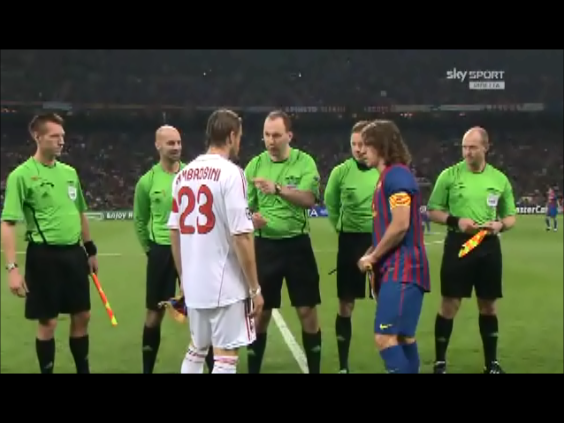 Indicating choice of side

This is a clear snapshot of Eriksson pointing out that the AC Milan captain had the choice of blue for the side of the coin. Puyol had just selected yellow (being the Away team captain) after Eriksson had asked him. Sometimes captains can be dazed by everything you are saying and body language sends a clear message. The pointing alerts Ambrosini that he is being spoken to directly. 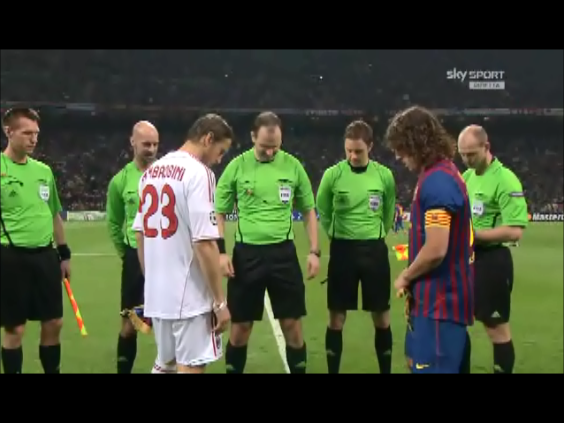 Eriksson flips his coin and when it falls to the floor. Everyone assesses the decision from their standing positions; no bending down. This is a technique I learnt in my Entry Level clinic and shows great professionalism. This avoids any glares, sly comments or silent-mouthing interactions between captains when the referee bends down to take a look at the side and pick up the coin. Best practices is to pick up the coin when the whole thing is done and when the captains have returned to their teams. Once in a while, captains or assistants pick up the coin for me. Just something to expect.

A simple Law question. Who won the toss by reading the body language of this video? Answer in the comments. 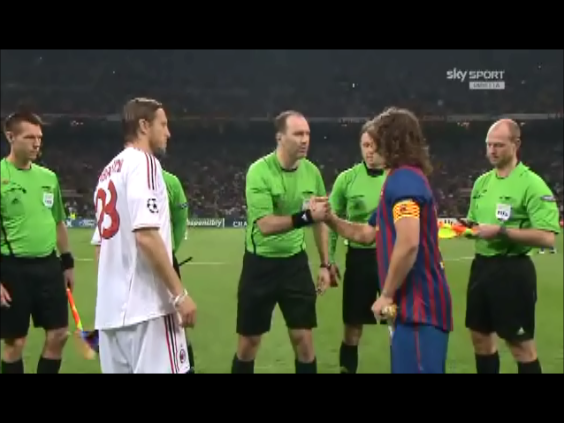 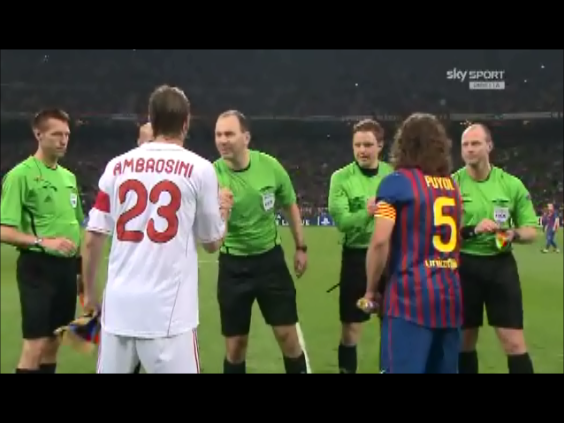 A clear conclusion to the proceedings by shaking hands of both captains. In order for this part to run smoothly, I take initiative very quickly to be the first to shake hands with the captains when I am the referee. A quick, brief pump of the hand and wishing them luck for the game. 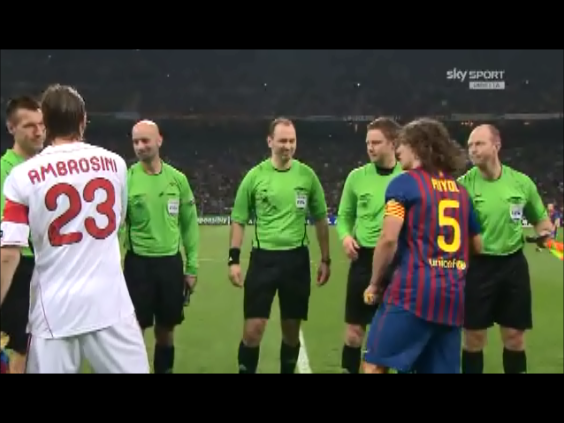 I almost always see captains trying to shake hands over a pair of people already shaking hands. The final step that makes the criss-crossing handshakes bearable is that the referee concludes his handshakes quickly and efficiently and then steps back. Notice the big space he creates when he steps back in order to allow his assistants to shake hands with the opposite captain. It almost creates a triangle of the group of 7 people.

When a captain attempts to shake my hand over another pair of people shaking hands, it’s hard to maneuver this situation since it occurred through no fault of my own. I can’t not raise by hand because it’s disrespectful yet I don’t want to shake over their hands which is unprofessional. Instead, I tentatively hold my hand out less than halfway to indicate I am almost ready to shake hands. The captain knows my hand is, then, coming. As soon as the pair in front of me finish their handshake, I’m ready to go and shake the awaiting captain’s hand. Much cleaner than the criss-crossing proceedings that usually occur.
Eriksson did point at the players in this scenario which may be considered rude but he was very brief in doing so. I prefer to use my entire hand (all fingers out) if I need to do so as it appears far less threatening.

Nice scenario, huh? What do you think?

I’ve placed another clip (subtitled myself) for you to enjoy or pick up on other useful idiosyncrasies of a coin toss by Howard Webb and the English elite crew for the UCL Semi-final clash between Bayern Munich and Real Madrid at Allianz Arena. This fixture took place on 17th April 2012.

Notice how curt and brief it was. The referee only said what needed to be said. This, of course, varies from game-to-game. Webb, personally, talks a little too fast for my liking or for the matter of subtitles!

With these tips, hopefully you are on your way to setting the right first impression on the field everyday!

Continued in next post, Referee Coin Toss Part 2: A Review & My Way